When Jay and Kim Hobscheidt saw that a trailer carrying 18 bikes and accompanying helmets for local middle schoolers had been stolen earlier in October, they felt compelled to do what they could for the Riverside Education Center.

The couple used some resources from their company, Dan’s Towing, to purchase four bikes to help with replacements.

“We live in this community,” Kim said. “The community is having such a hard time as it is, especially our youth. They don’t understand so much about the pandemic and the stresses we adults are having. To have a nonprofit lose such a big piece of their program that helps the children in this area, I mean, we’re parents and it just tore at our heart strings a bit and we wanted to do what we could to help them out and get these kids back active and not having to worry about, ‘Well, our bikes were stolen. What are we going to do today?’ ” Dan’s Towing was far from the only entity to notice REC’s transportation misfortunes. The Community Hospital Foundation pitched in for some helmets. Many community members have also responded, donating nearly 50 bikes and 50 helmets to the program.

REC provides after-school tutoring services for 10 local schools, and bikes are a big component in the program. With the recent influx in bikes, the wheels of production are spinning once again.

“We use bikes in a couple of different ways,” said REC Program Coordinator Jack Curry. “We use them as part of our curriculum for social learning program, but more than anything, it’s an incentive. We do structured academic tutoring in after-school hours, so kids come and do their homework for the first hour, hour and 15 minutes, and we like to try to incentivize regular attendance at our programs. We use bicycles as a way to do that. Almost every day of the week, one of these trailers is at a school being used on the school grounds there.”

Curry sees bikes as strong tools for kids to challenge themselves in a safe environment and overcome small challenges, especially if they’re learning how to ride them. Curry believes learning to ride a bike serves as a framework for problem- solving, confidence and resilience in students.

In addition to donated bikes and helmets, other community members have donated money to the cause. That money will go toward some properly sized bikes as well as maintenance. Curry hopes donations will continue.

“A lot of the stuff that’s been donated, we get either adultsized mountain bikes or the more kiddy bikes you might see training wheels on,” Curry said. “There’s an in-between size there we definitely have some need for. We have these bikes and are working on our infrastructure to be able to maintain them. Any tip or monetary donation helps. These are beautiful donations, but if we’re not able to have it be sustainable and keep them up to a safe and working place, it’s all a little bit for naught. Definitely would still appreciate some additional funds.”

Thanks to the donations, REC has been able to re-establish its routines. Last week, four groups of middle-schoolers used the program’s bikes, most of which are the newer donated bikes. Next week, they’ll be used for a family-oriented event at Corn Lake.

Now, fortunately, REC’s biggest bike-related concern isn’t whether it will have enough bikes; it’s simply the weather they’ll be riding in.

“REC reaches a lot of kids,” said REC Special Projects and Development Specialist Kristen Lummis. “Most of these kids have a risk factor of some sort. Many of them may not have their own bikes or they may not get to go outdoors on trails that a lot of us take for granted. What Jack does, is he works with these kids, gets them outdoors, gets them trying new experiences that really help build their confidence, their skills and their belief in themselves.” 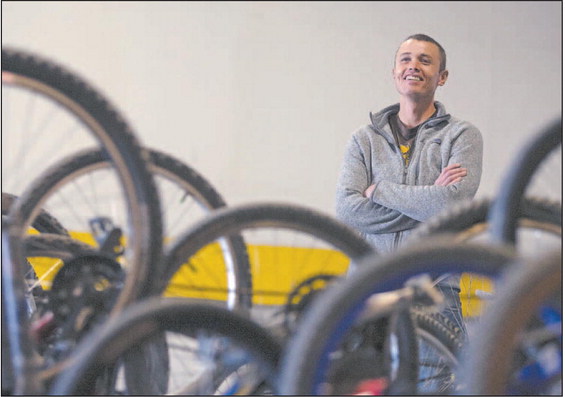 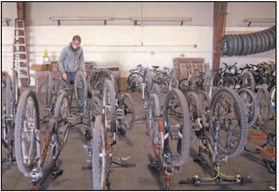 After a trailer carrying 18 bicycles and safety helmets was stolen from Riverside Education Center, various members of the community responded spontaneously to replace the loss. More than 50 bicycles have been donated following the October theft.

Click here to see this page in the eEdition: